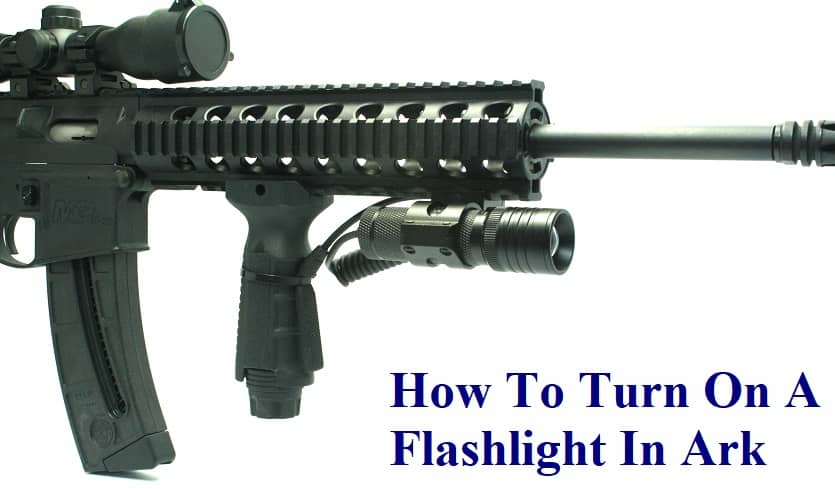 Any game lover would know the intriguing game play of Ark: Survival Evolved. The game starts from an island named Ark with men women stranded in to and fighting to survive against enemies.

There are several ways that gamers can fight their way out of the island, but none comes close to the usefulness of Ark Flashlight with the weapon. It illuminates the enemy right on the spot allowing to shot decisively.

Despite such a baffling outcome of using the flashlight as a secondary alternative, the attachment isn’t straightforward at all. So, today we will discuss ​how to turn on flashlight ark.

Are you up for it?

A straightforward ​Way ​- ​How To Turn On A Flashlight In Ark

The Ark flashlight attachment is a handy tool in the Arm gameplay arsenal. While torches lose durability and efficiency quickly, the flashlight keeps ticking on and on throughout the game development stages.

Let’s see how you can turn on your favorite Flashlight Ark attachment during the game.

That’s all you require to perform to activate the flashlight and aim your enemy with better precision.

Unfortunately, the gameplay of Ark: Survival Evolved is designed in a way that every time you want to toggle between the weapons, equipment, tools, and whatsoever things, you will require to press the “N” button each time. This is somewhat disturbing for gamers.

So, we thought about an alternative way, and guess what? We came up with an effective option convenient for every gamer.

The alternative way to turn on the Ark Flashlight

If you don’t like pressing the “N” button too many times to switch between your weapons and other tools, you may choose the alternative. You can perform the switching between weapons using the reload key. You will need to double-tap it. Sounds easy, right?

The process for different gaming options follows as:

Over time, it is seen that Ark gamers are more comfortable with their traditional torchlight to ply the game at night. Although torchlight illuminates a larger area, the flashlight isn’t very backward either. To speak the truth, playing Ark with a flashlight like J5 V1 Pro turned on gives players a unique advantage over others.

Some of the most apparent edges of using flashlight are:

Once you achieve these two prerequisites, you can access the flashlight attachment in your arsenal. You can operate the enclosure with the following weapons-

Once you have access to the brilliant Ark flashlight attachment and know how to turn it on, your gameplay will never be the same.

Turn on the flashlight, seek enemies, and headshot to Heaven. You will love how the flashlight attachment brings success to the entire gameplay allowing you to advance fast and for sure.